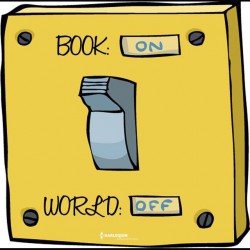 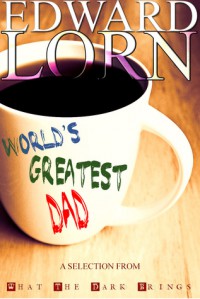 A rainy day is a perect day for reading. Yesterday afternoon was that kind of day. Dark skies, heavy rain drops falling on my metal roof. The wondrous sounds of thunder, followed by the bolts of lightening sneaking through the blinds. A scented candle flickering softly on my hutch, casting the only light in the room. PerFect! Just heavenly!! One must also have the right book to go with this rainy day of perfection and my selection couldn't have been better. I only wish it would've lasted longer. Edward Lorn, you sneaky devil!! Was this your clever way to bring me over to the darkside? You see, I don't normally read horror stories but I am infatuated with Investigation Discovery channel and so it was quite natural for me to select such a book. As I was searching for a book yesterday, reading reviews on Goodreads, I ran across this dark tale and was drawn to it. I had to have it. (https://www.goodreads.com/book/show/20894005-world-s-greatest-dad) And so it began.

World's Greatest Dad begins on Halloween night. Let me set the scene: A father is drinking his upteenth cup of coffee from a mug his ten-year old daughter made for him, misspelled with the words "World's Gratest Dad". Carl, the father, is waiting to take his daughter, Kimmy, Trick-or-Treating. Kimmy comes bounding into the room dressed as a witch, her pointed hat flopping over at the top. Cheerfully, father and daughter head out into the night filled with spooks and freaks a plenty. Sitting in the middle of the sidewalk, passing out candy, is a freakishly real looking werewolf. Nothing strange here. It's Halloween. Kimmy approaches him and Carl is distracted by a neighbor named David. The two men fall into a short conversation and Carl loses Kimmy. Searching amongst the many children dressed as witches, ghosts, and goblins and calling Kimmy's name over and over, Carl is faced with the terrible truth that he has lost Kimmy to the night. He cannot be the World's Gratest Dad. Kimmy will be found but it will be too late and Carl and his wife will be faced with new horrors. Poor carl. My heart broke for this famimly. Although I did not lose a child in such a manner, I did lose my eight year old daughter as we waited for a heart transplant. She was stolen from me just the same. I understood Carl's pain and confusion. I could understand the darkness surrounding Carl's mind at such a time. It was easy for me to comprehend Carl's need to lash out and find a means of justice for such cruel intentions. And Carl WILL get justice. Lorn makes sure of that, finding a creative way for Kimmy to communicate to her father from beyond. I loved it. Go Carl!!